Knowing that other researchers are looking for answers to similar questions to ours is a good signal of the interest of the topic. In this case, Aditi Muralidharan, Zoltan Gyongyi, and Ed Chi have done two studies on social annotation in web search using eye tracking technology. Here, in Barcelona, we have been running related experiments in the last months and arrived to similar conclusions not published so far.


1) 11 users perform several personalized tasks. Half of the results have snippets with social annotations, the other half have not this kind of results. Test is recorded with an eye tracker and the users watch the recording in a retrospective think-aloud (RTA). The conclusion is that most of people did not notice the social annotations, and those who saw them, don't pay too much attention. Why people don't see them? (see the second test)

2) 12 users (all of them know each other) perform several tasks in mock-ups of search engines. Again, half of the results have snippets with social annotations, the other half have not this kind of results. The pages are mock-ups because they have been modified in order to present social annotation with variations: big/small profile picture, above/below snippet, first/second position, long/short snippets. The test were recorded with eye tracker. The conclusion is that when the picture is big and when the social annotation is above the snippet, people notice it. The reason is that users have a pattern of reading in page results and they don't see further than the elements they recognize as useful in a first scan: title and url. So, new elements like social annotations prompt "inattentional blindness" (as Mack, Rock name it). This phenomenon is widely known, you might have seen the video with the gorilla dancing while other people is playing... and nobody notice it.
In a future paper, the authors could do more experiments to know if changing the style of this snippets would make them more visible.


Our study have not been published, so I will not write many results here so far. We studied 5 kind of snippets: Google Places, Google +, Google Author, multimedia and reviews. We duplicated each page of results removing in one version this rich snippets. We prepared 10 SERPs (with their 10 duplicated plain snippets pages). 60 users performed the 10 search and they saw 5 pages with rich snippets and 5 pages without the rich version of the snippet. The sessions were recorded with an eye tracker.
The preliminary results show that, in general, it does not exist significant difference (t-test) between the user visual behavior when looking to pages with rich snippets and the similar pages without them.
The metrics that we considered were mainly the fixation duration in the rich snippet (and his equivalent as a plain snippet) and the time to first fixation in the rich snippet (and his equivalent as a plain snippet), as well as the click count.
We hope to share soon the study with the scientific community and with SEO practitioners.
These heat maps show the fixation duration in the SERP with plain snippets and "Google +" snippets in 6th and 2nd position. No differences 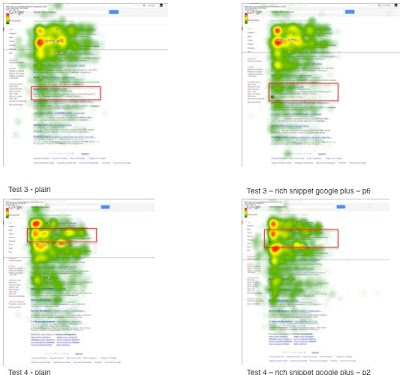 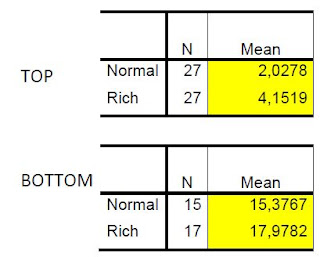